Is it true that cinnamon can lower blood sugar in people who have diabetes? 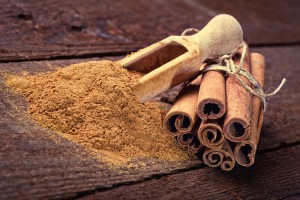 Whether cinnamon can lower blood sugar is a topic of debate — but recent research suggests that cinnamon may be helpful as a supplement to regular diabetes treatment in people with type 2 diabetes.

A 2012 review of several recent studies concluded that the use of cinnamon had a potentially beneficial effect on glycemic control. One study published in 2009 found that a 500 mg capsule of cinnamon taken twice a day for 90 days improved hemoglobin A1C levels — a reflection of average blood sugar level for the past two to three months — in people with poorly controlled type 2 diabetes (hemoglobin A1C levels greater than 7 percent).

More research is needed to confirm these findings and determine how cinnamon supplementation leads to these benefits. One theory is that cinnamon increases insulin action.

If you have diabetes, remember that treatment is a lifelong commitment of blood sugar monitoring, healthy eating, regular exercise and, sometimes, diabetes medications or insulin therapy. Consult your doctor if you have questions or concerns about your diabetes treatment plan.