Many people tell me they don’t need first aid training because they work in an office setting. I hate to break the new to you but, life happens. Unfortunately, a staff member of Niagaroma Spa was killed by a car inside the spa. Yes, inside the store. Take the time to learn to save lives. 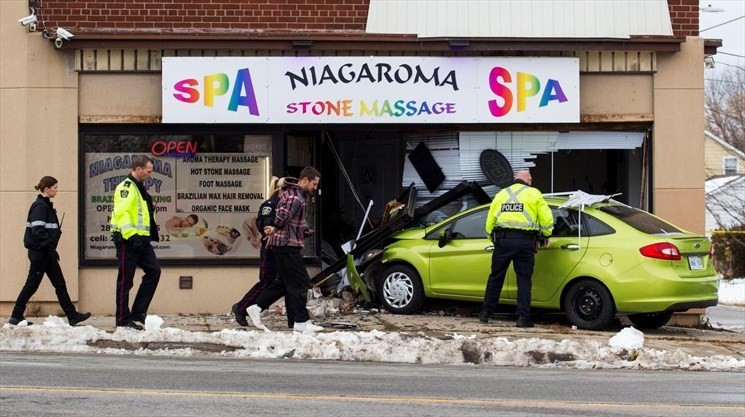 A 59-year-old Hamilton woman is dead after a car crashed through the front window of a Niagara Street business in St. Catharines just before noon Monday.

Niagara Regional Police, in a news release issued Monday night, said initial investigation revealed a 2012 Ford Fiesta was southbound on Niagara Street when the driver lost control near Maple Street, left the roadway and collided into a building at this intersection striking the woman inside the business, Niagaroma Therapy at 103 Niagara St.

The woman was taken to St. Catharines hospital where she succumbed to her injuries.

The driver was arrested at the scene.

Witnesses across the street from the spa business said they saw the driver out of the car and attempting to look into the building past the smashed vehicle before police arrived.

They also said emergency service personnel and firefighters worked to pull the woman from the wreckage of the front part of the spa. They then worked at resuscitating the woman before she was taken to hospital by paramedics.